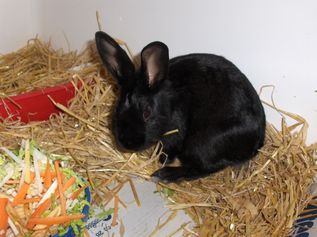 Huey had to be put to sleep on 12th November 2010 due to ongoing problems with his teeth.  He had many anaesthetics so that his teeth could be filed,  but it was decided that these were becoming too frequent and his general health was suffering as a result.  For a short while Huey was being fostered as a companion for an older female bunny (Pippa) , but he developed spurs on his back teeth, which was causing him pain & he started to lose weight.  He was brought back to the rescue where he has become the ‘boyfriend’ of Stella for a few months until his demise.