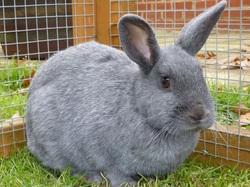 Mischief died in her sleep whilst at the rescue.  A post mortem revealed that she had a Coccidia infection of her liver, and that liver failure was the cause of death.  Many rabbits are exposed to Coccidia and carry the parasite in their gut, and in young rabbits this can be a killer, but adult death due to gut infection is thought to be rare.  This is the first case of liver infection that the rescue has encountered.  Mischief came to us with her ‘friend’ Frosty who is likely to be a carrier.  We are treating Frosty with medication to kill the parasites and whilst she appears to be fit and well we shall keep a close eye on her weight and general health

Mischief is a female grey medium sized rabbit.  She came into rescue as her previous owners are emigrating.  Mischief came to us with her companion, Frosty, but we have had to separate these 2 bunnies as they have been fighting.  This can be seen by the fact that Frosty is missing part of her ear & we believe that Mischief is the culprit!

She was neutered on 18th October 2010, so will be ready for rehoming 2 weeks after that date.  Mischief will be looking for a neutered male companion to live with. 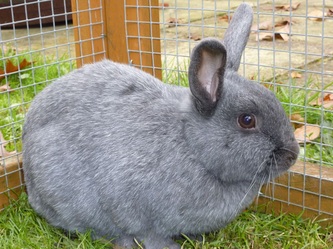