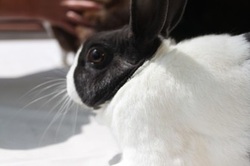 Louis came to us in July 2008 after he was ‘rescued’ by  a member of the public from a country show where rabbits were being sold.  His front teeth were sticking outwards so no one would buy him and the sellers said they’d let the dogs play with him unless he found a home!

All of Louis’ incisors were removed in Sept 2008 and after that he became a  full-time friend to Truffles, another of our long-term residents.  They got on together from day one and gave each other companionship until sadly Louis had to be put to sleep after suffering from breathing difficulties.